Day Two – Panama and the Canal

Despite being grumpy after only five hours of sleep, my husband, son and I are packed and downstairs in the dining room at our Miami hotel by eight(ish).  After an expensive breakfast of instant oatmeal and microwaved frozen biscuit sandwiches – should have raided our son’s remaining snack stash despite the pudding biting the dust before we could leave Austin – we are on the hotel shuttle and heading to Miami International Airport by nine. 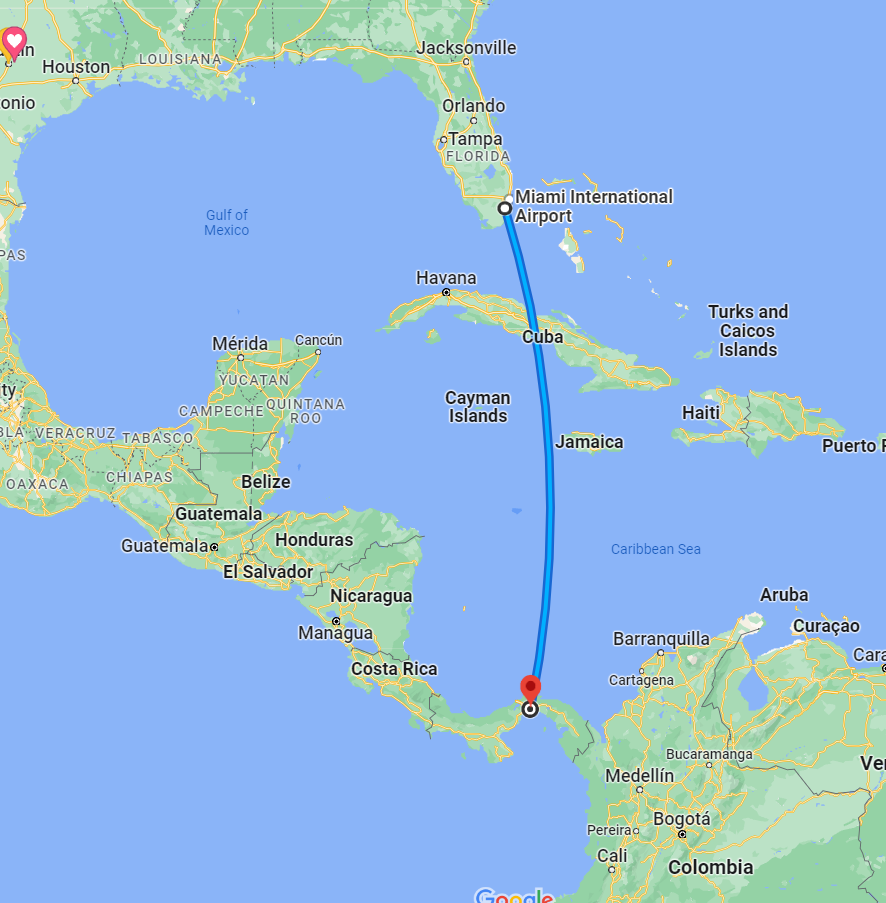 While riding in the shuttle, I found a text message from Sammy’s boarding kennel with a photo of our pup.  He’s in a play yard with other dogs.  His tail is up, his eyes are bright, and he looks like he’s having fun.  Boy, do I feel less guilty for leaving him behind!

Miami International at nine in the morning is busier at than it was at midnight.  We joined quite a few people in the international ticket area who were also confused and milling about.  It helps to have a son who is tall enough to see over most people’s heads and read the signs on the next gate (he’s good for taking pictures at large concerts, too, when all I can see is the back of the shirts of the guys in front of me).   We were only separated once, which is a record for three people who all want to take charge.  But we all finally found the proper gate for the flight to Panama, behind a hundred or so other people.

The gate personnel were well organized, staffing a desk halfway through the line where tickets, passports, and the various COVID travel requirements could be checked.   Anyone who didn’t have their paperwork in order could step out of line and work on it – which did not include me, the obsessive organizer, who had digital AND hard copies of everything.  In triplicate.

After a half-hour or so, we were about twenty people away from the ticketing counter when one of the gate personnel noticed me in line with my cane and brace.  The kind soul immediately led us over to a handicapped priority gate I hadn’t noticed.  Husband and son glare at me for not knowing we could do this.  The ticket agent takes our paperwork and admonishes me a second time because I had found us a deal on business class seats (so worth it if finances allow) and there was a priority gate for that, too.  He gestured toward the line next to us – the one with about twelve people in it.  Husband and son double-down on the glares.  Okay, so I didn’t anticipate everything.

Through TSI again and on to the gate.  Have I said MIA is a big airport?   It is a REALLY BIG airport.  But eventually we found our gate, which had more gift shops nearby for my son to visit.  He’d been lectured as we walked miles of concourse about NOT buying things at the airport that he can get for half the cost at an outlet mall near home, but his trip money was burning a hole in his pocket.  We made him promise to at least get out of the country first.

Best of all, National Geographic found us.  They have a person whose job it is to round up cruise passengers and make sure everyone gets on the flight.  I sat us down nearby so I could relax and let someone do the worrying for a while!

Finally, we are on the plane and in the air to Central America.  My husband traveled internationally long before he met me, but our son and I were newbies.  We were completely unsophisticated about it.  Or at least I was; I watched flight path maps and kept pointing out what countries or waterways we were passing over, I marveled at the fact that we changed time zones going from Austin to Miami but not from Miami to Panama, I read everything in the seat pocket including the airsick bag, and investigated every compartment and entertainment option.

My son closed the blind and slept again.

Most of the trip was over clouds, but this is the city we saw when we descended toward Tocumen International Airport. 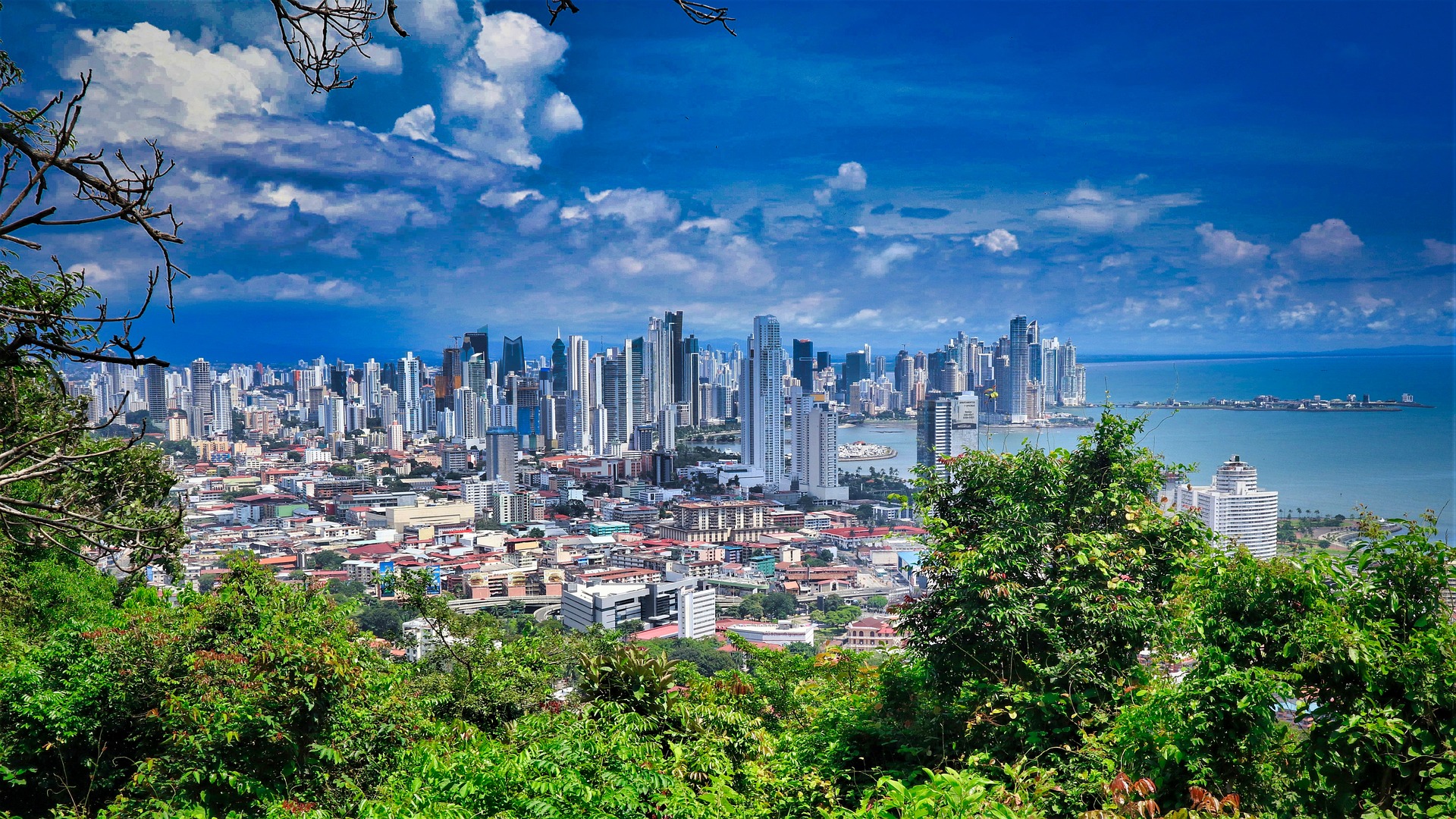 We found out later that Panama City is a major international banking and financial hub.  I can tell you that it is also surrounded by lush, green hillsides and wrapped around a beautiful bay.

Tocumen isn’t the size of MIA, but it was no less challenging.  Signs are in Spanish, of course, but we’re so rushed by people behind and around us that even my Spanish-speaking husband can’t keep up.  Instead, he suggested that we follow other people we knew were on the National Geographic cruise.  Even if they didn’t know where they were going, either, Nat Geo probably had a passenger wrangler here, too.  If enough of us were missing, they’d come looking.  Or we’d all end up at the right place.

Although the signs were in Spanish, everyone, and I mean everyone, spoke English.  I did not have to subject them to my dubious language skills.

Our Nat Geo shepherd was waiting outside of Customs baggage claim.  We were – surprise – the first of their charges to emerge.  I credit it to my savvy purchase of purple, red and bright blue suitcases that stood out in the rows of black and navy in baggage claim.  My husband thinks it was his efficient bullying – I mean herding – of his family through the system.  My son was just sorry he missed the shops.

The Nat Geo rep brought us to a bench near the shuttle stops and told us to sit and stay.  We had a short wait in gorgeous, sunny, January weather as everyone else on the tour trickled out.  Then we all boarded buses and drove to a nearby  hotel to take a rapid COVID test – we had already taken required tests three days before leaving the States, but Nat Geo was being very careful.  Everyone, thankfully, passed.

On to the port. 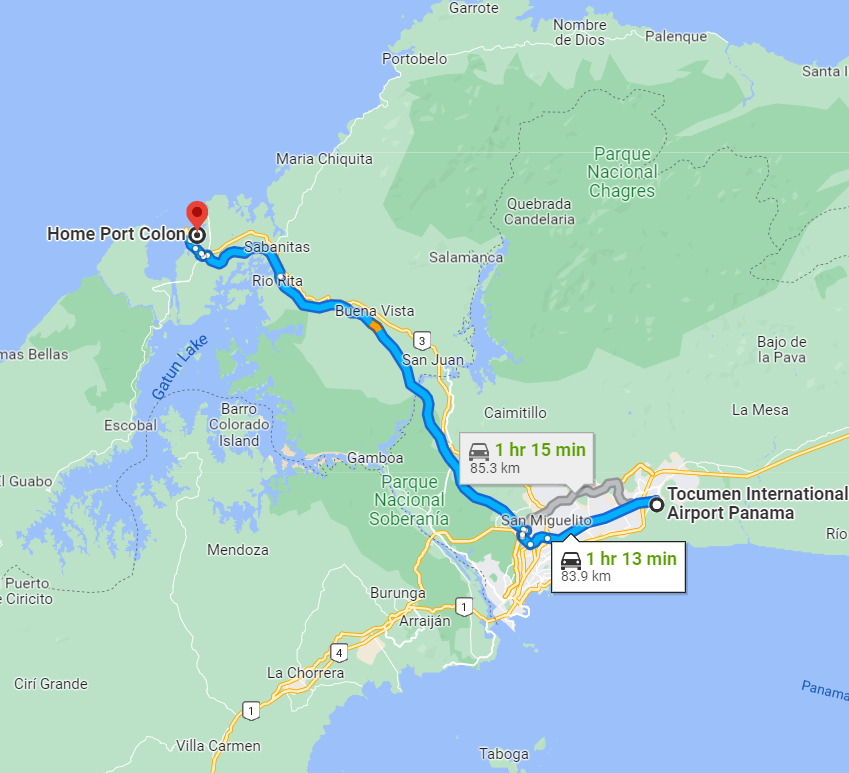 Interestingly, the airport is on the Pacific side of Panama.  Our ship would be entering the Canal on the Caribbean side near Colon and anchoring in Gatun Lake for the night.  This meant that we had to drive across the entire country to catch our ship.  It took about 45 minutes.  I’m used to planning vacations that start with a minimum of six hours of driving just to get out of Texas, so that was cool.

The highway to Colon was lined with beautiful tropical forests – I’m from a more arid climate, so please forgive me if I talk about plants a lot.   There was also poverty.   Like in so many countries, including ours, the wealth that builds the amazing skyscrapers doesn’t seem to be reaching shacks precariously hugging the hillsides. I know that’s simplistic, that poverty is complicated, and I don’t pretend to have a solution.  But I can’t think about the trip without also wondering if the tourist dollars of lucky people like us eventually helped any of the Panamanians who lived along the highway, or if we were just rolling past their lives leaving nothing in our wake except exhaust fumes.

The port in Colon is located near the historic center of old Colon with beautiful old buildings dating to the mid-nineteenth century, long before the Canal was finished.  Some have been restored but many were in a state of decay.  Both my husband and I have been active in historic preservation and it was good to see these buildings still standing.  There is an initiative to save the district through the non-profit World Monuments Fund, which has an interesting short video on their efforts on their website at https://www.wmf.org.

Next stop was a small warehouse where we were told to place our luggage at the front and take a seat in rows of chairs in the center of the room.  A dog sniffed the luggage for contraband (our son’s remaining snacks survived; that pup had a lot more self-control than ours) and we were on through the building to board our home for the next week. 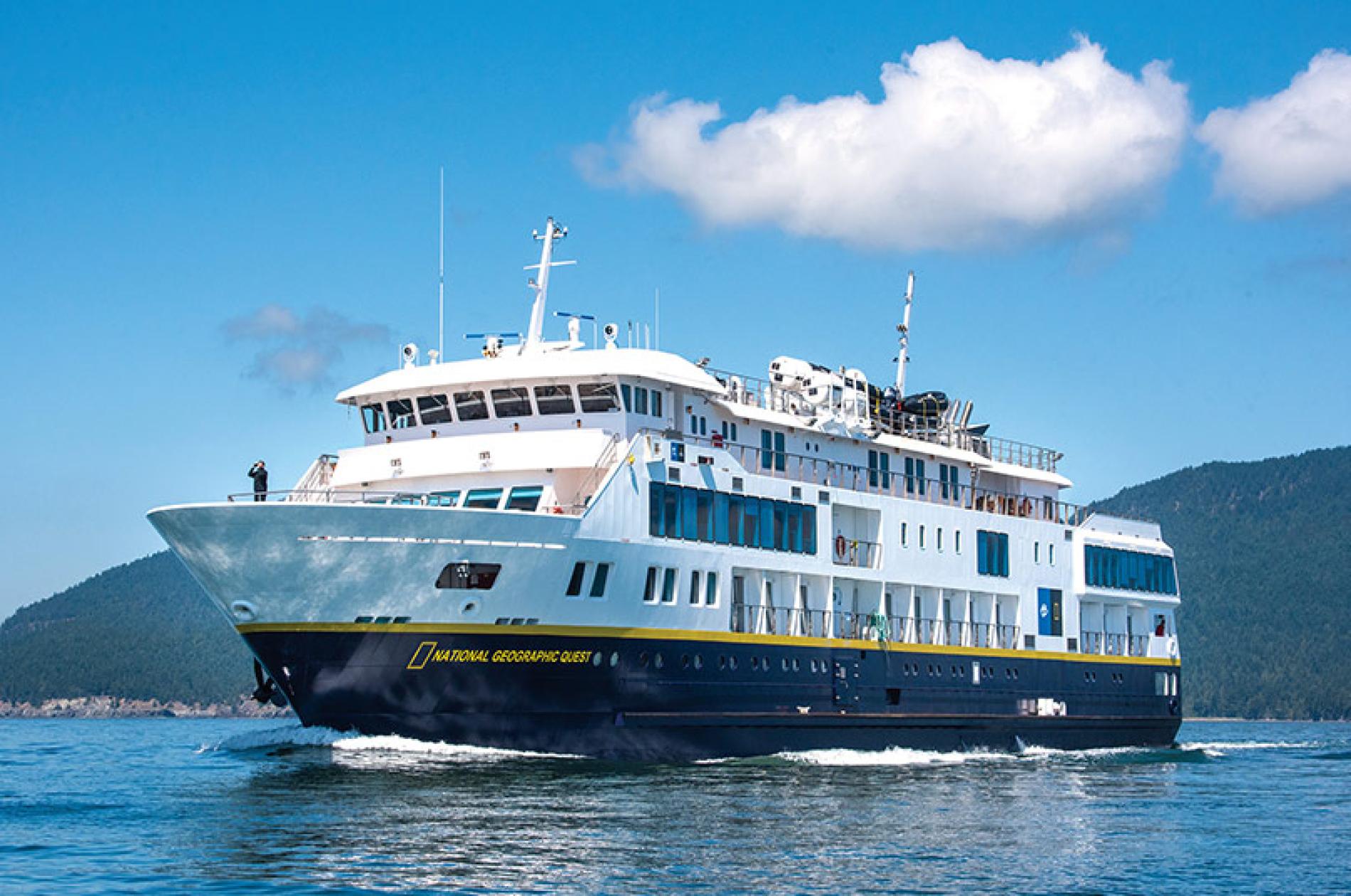 Our ship, the National Geographic Quest.  This is the cruise line’s promotional picture, but the ship really is this pretty in person.

According to the crew, we barely made it in time.  The Canal authorities have a strict schedule; there is so much traffic through the canal, if you miss your spot you may have to wait for days or weeks for another chance.  The original itinerary was a morning flight out of Miami, a quick COVID test, and plenty of time to go through customs at the port and get on the ship.  When the airline cancelled their morning flight to Panama, switching everyone to a flight that left hours later, the travel planners had to scramble.

Embarkation involved having luggage whisked away as soon as it received canine clearance, a welcome at the end of the gangway with a warm towel to refresh ourselves (very posh) and being directed to our room on the top deck.  Our luggage somehow managed to beat us there.  Then came unpacking, orientation in the ship’s lounge, and dinner.

My biggest fear, that I wouldn’t be able to navigate the ship because I wasn’t, technically, supposed to be on it, was put to rest.  An expedition cruise is advertised for people who are in reasonably good shape and I am not; cane, brace, and a body more fluffy than svelte isn’t at all what they are expecting.  My husband was here to transit the Canal and my son to talk to Nat Geo scientists and explore the natural world he loved.  Secretly, I was just hoping I could sneak past the healthy types and not make too big a fool of myself or be a burden on the staff.  Okay, maybe I did wish I could snorkel and see a coral reef for the first time, and I was pretty sure I’d be fascinated by the workings of the locks and would enjoy seeing the local flora and fauna, but beyond that I just wanted to make it through the week.  I assumed I would be limited mostly to our stateroom and I brought my writing to keep me busy while the boys were out and about.

But so far, so good.  The ship had an elevator and handrails along the corridors in case the ride got bumpy.  There were four guest decks, capacity for just 100 passengers and only about 40 on board, so no endless walking or crowded venues involved.  And the crew?  Absolutely, incredibly amazing.

By dinnertime, we were already on our way through the Gatun locks.  They would lift us from the Caribbean up to Gatun Lake, which was created by the Canal builders to control the  Chagres River and to supply water to run the lock system.  We would be anchoring there overnight, a rare privilege as most ships traversed the lake, which connects the two lock systems, without stopping. 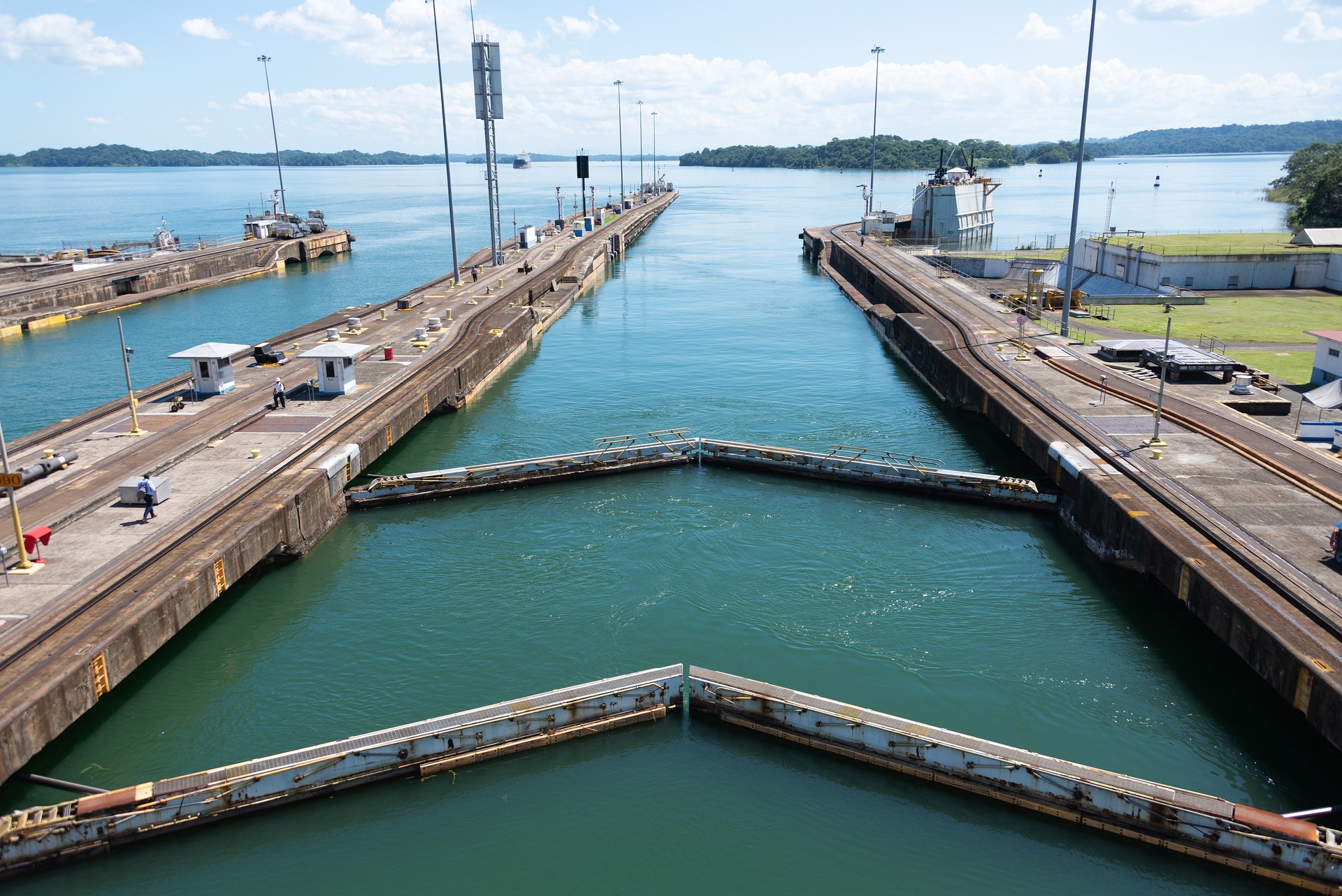 This is a photo of the Gatun locks in daylight.  Unfortunately, we had to traverse the locks at night.  The largest ships travel during the day because of the delicacy of moving them through the locks, which were built when cargo ships were much smaller than they are now. 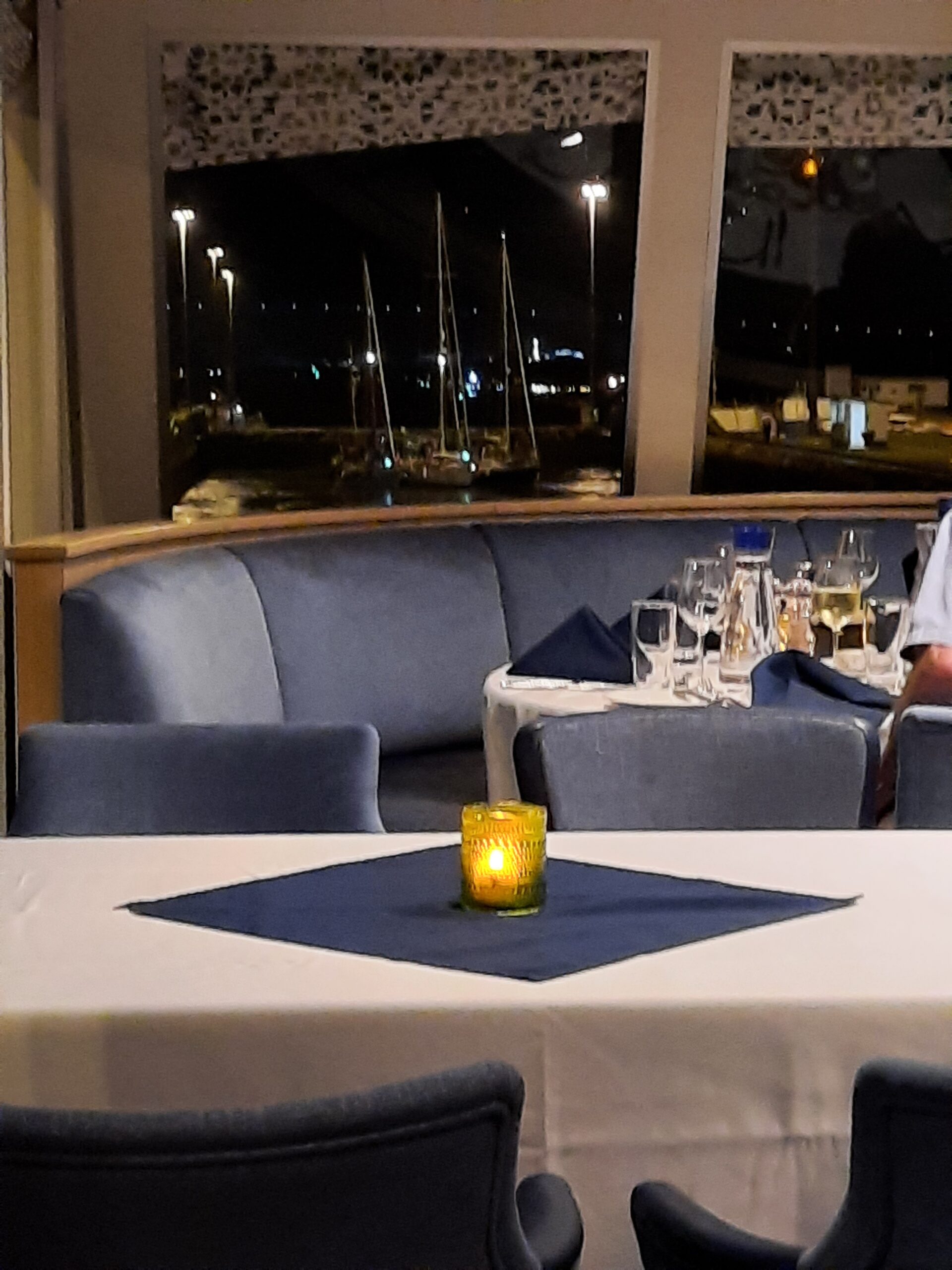 The Quest was short enough that sailboats, which appeared to be lashed together, were able to move with us through the locks.   In the photo below, which was taken in the dining room, the gates for the lock are just behind the sailboats.

During the transit it was raining, so we chose to watch the action through the windows.  Once through the locks, we were off to bed.  It had been a long day.